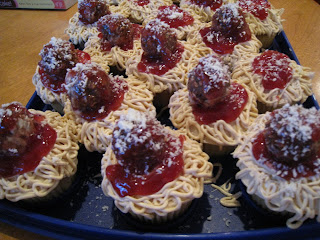 I happened upon this really cute cookbook called "Hello, Cupcake!" on Heather Melzer's blog. I think it is one of the cutest cupcake idea books I have ever seen. On Heather's blog sh 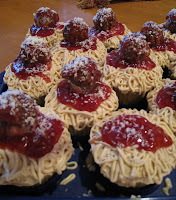 e made the corn on the cob cupcakes that are featured in the book, there is also a t.v. dinner! Which consists of six cupcakes in a foil cupcake tin. Each cupcake decorated differently. One is mashed potatoes, one is the peas and carrots, one cupcake is the turkey... you get the idea! After reading Heather's blog, the same night I happened upon the Martha Stewart late run of her sh 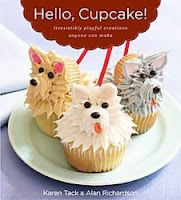 ow
and the author of Hello, Cupcake! was on the show! Showing the audience how to make these adorable creations! I wished I had this book years ago when my kids were younger... so many cute party ideas. Plus is there are cute Christmas cupcakes, summer cupcakes, a flag cupcake cake. The photography is gorgeous. As you turn each page you will literally sigh, "Aaah." Anyway, I made the spaghetti cupcakes. They came out adorables! My son wanted to know why someone would want to eat "spaghetti" for dessert? Mission accomplished, if he thinks they really looked like pasta!
Posted by simply susan at 2:18 PM

Hi, I am one of the author's of Hello, Cupcake! and I have to tell you that your Spaghetti and Meatballs look great. No wonder they think it is real pasta! Thanks for posting the photo, do you think we could use it on our BLOG
blog.hellocupcakebook.com
We are showing reader's cupcakes so other cupcake crafters will take the plunge and try them too. We are going to start a monthly cupcake challenge on our site too, so cupcakers can see what each other is doing with the same challenge, sort of a Hello, Cupcake! Club. If you want to join in the fun just look for it on our site.