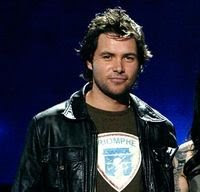 "Surprised" does not even begin to describe the feeling I have from last nights American Idol. Having Michael Johns go home so early in the last stretch is quite the upset! Although, I do not think he was the most talented of the top ten... he was the best one to look at. Plus I liked to listen to him talk. He has such a nice voice and way about himself that was refreshing

. I felt he should have been in the top five if not the top three. But I guess the contestants can not just come out on stage and sing another artists music without mixing it up a bit. I felt there were definitely four other performers who should have gone home based on their performance from Tuesday. Not to mention that Ryan Seacrest was cruel when he said "last year during Idol gives back we did not eliminate the contestant with the lowest votes, but tonight..." and so the audience (and Michael) is thinking whew that was a close one... and then the final blow "but tonight we are saying goodbye to Michael Johns." The End. Shock, surprise, disappointment, devastation...
I guess this gets me off the hook to make sure I am home to watch this show. As I have no desire to actually "tune in." I can listen to it from another room or watch highlights on elimination night.
Posted by simply susan at 9:16 AM

The first thing I thought of last night was " What is Susan going to think?" I am so dissapointed too!!!!

Can Lauren come over tomorrow, or if not, Sunday? Please?? : )