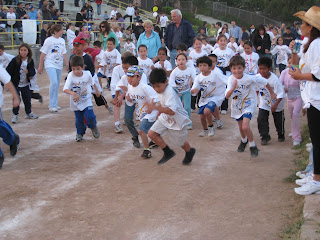 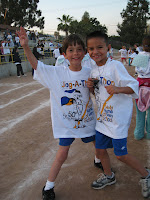 Last Friday night was Holy Name of Mary School's Jog A Thon. The students raise pledge money according to how many laps they can run in an hour, from 7pm until 8pm. It is a fun event for everyone as parents get on the track and jog along with their kids. Teachers are out there, the school principal is out there, event HNM graduates come to this event. There is a BBQ booth sponsored by the Sports Booster Club, a raffle usually a bike is given away - this year they gave a wii system. I am interested to find out how many raffle tickets for the wii were sold versus the bicycle. I like the bike. It gets the kids outdoors instead of infront of a television. 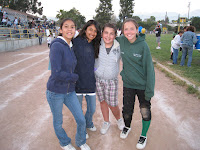 Jackson ran the track and put a good effort in making his laps. Lauren is now at the age where she goes to the event for the social aspects of it. She had a game right before the Jog a Thon so she was still in her softball uniform. Her friends are at the "too hip" age to wear their Jog A Thon t-shirts. They walked a coupe of laps and then I believe they went up where the music was playing requesting songs from the D.J. Here we go...
This blog entry is dedicated to Gabe. He requested a blog about Holy Name of Mary. I saw your Mom at Jog A Thon, Gabe, but were you there? Where were you hiding at?
Posted by simply susan at 10:03 AM

I actually WAS there! I ran with jackson the whole time! we were keepin track of the laps we had (and he asked how many he had every 5mins. thinking he might've gained another lap every time he asked!) also, before I ran, I saw YOU and was standing less than 1ft from you, thinking you might've noticed. I didn't say anything c'ause I was afraid of saying something wrong. I was sad Lauren didn't run with me... (sigh) she always used to...

we would run ahead of one another until the point of physical exaustion... I guess she just didn't want to this year... Jackson and I tried to get her to come, but failed... I was looking forward to that... =\