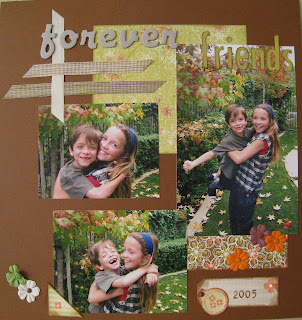 Forever friends, does not necessarily mean that they get along when they are together. They are at each other! But then when they are not together they miss each other. Lauren had a sleepover on the weekend so it was just Jack and I on Saturday night (David went to the Angel game with his "buds."). Jackson and I went to Mass and then I took him to his favorite restaurant. I told him I would take him to the movies afterwards but he wanted to rent a video and watch it at home. Sounds like a plan! When he fell asleep Dad still was not home. So in the morning when he woke up he went into Lauren's room to see if she came home (so cute... he said "oh yeah she's at the birthday"), and then he went to make sure Dad was in bed and that he came home. Once he surveyed the situation his breakfast requests were announced! Little bugger! He loves Lauren. He always looks after her. When she is grounded from something he wants to save his dessert for when she can have some. "Oh, Mom, let's let Lauren watch Survivor, she's been good today." Cute stuff like that.

This picture was taken in our yard when the leaves were turning colors. It was so pretty. Since we do not leave back East this is our "fall." I used papers from Daisy Bucket and the Daisy Bucket paper ribbons. The title was American Crafts chipboard. So easy to use I like it. I left the chipboard unfinished because I liked the roughness of the look.
Posted by simply susan at 6:45 AM

I know I wasn't there when that all happened, but the way it was said was marvelous, what a funny story! I'm still laughing! Jackson is a great brother to his sister... He's a great kid! : )

Have you blogged about Holy Name? That should be your next blog! : D