tching Lost? I am so intrigued with this series! It has me on edge each time an episode comes on. I can not even begin to absorb all the little details and inuendo's that play into each scene. I go to losteastere


to see all the things I missed. I liked how last weeks episode was replayed so I could look for the clues I just learned about.

It appears that the group of four can help our Lost friends with the discovery of the helicopter. An interesting group of four. Daniel Faraday seems like he genuinely wants to help. Curious what happened to Penny's scouts. They made mention on how they had a reading on the location. I hope Desmond and Penny are reunited. 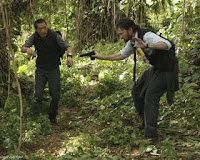 Not quite sure about the "Flash Fowards" that we have been teased with recently. Does not make me hope for their rescue if Jack becomes drug addicted and Hurley goes to a Mental Institution. And who are the Oceanic Six? Who was in the coffin that Jack went to give his repects to at the funeral home with the anagram name of "Flash Foward." And why does he meet Kate outside a runway at an airport? What was that supposed to signify?

I just want to "flash forward" to Thursday night to get my next "fix!"
Posted by simply susan at 7:28 PM