Flag Ceremony for the Cub Pack 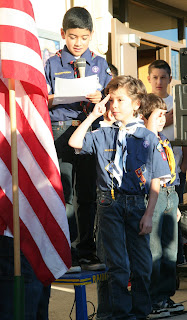 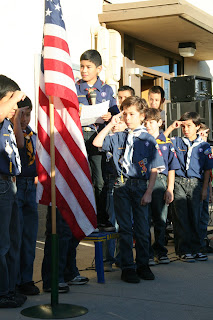 This morning my little Cub Scout was in the Flag Ceremony! Their Pack (Pack 423) was asked to bring in the colors for the flag ceremony at the school assembly in honor of Catholic Schools Week. The boys are so cute in their little scout uniforms, standing at salute and reciting "The Pledge of Allegiance." Jackson is really enjoying his time with Cub Scouts. He went on an over night stay to the Science Center in Santa Ana last Friday night. They get to spend the night in the museum. Such an organized event too, they had a movie at 10:00pm. They saw Bolt and a dinosaur movie. Jackson told me that he was awake until 12:45 am and got up on his own at 6:00am to be treated with cartoons! He had so much fun hangin' with his friend Aaron and bought a coll airplane from the gift shoppe they have there.
He looks forward to each meeting! He loves scouting! 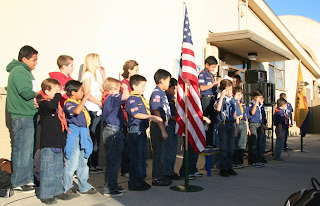