They're Filming in San Dimas! 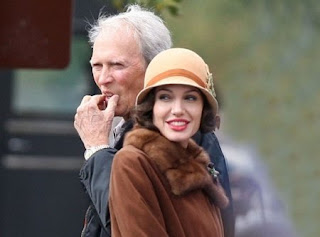 How exciting when a major motion picture comes to a town that you live near. I saw them filming on Third Avenue in San Dimas last Monday night (October 15th) on my way to a Girl Scout Leader meeting. There was a cable car in the middle of the street. The next day Bonita Avenue was blocked off and they were filming in front of San Dimas Ace Hardware and the San Dimas Train Station. Rumors were flying as to who was in the picture. Well it turns out the film is The Changeling directed by Clint Eastwood and staring Angelina Jolie. Also in the picture is John Malkovich and Jeffrey Donovan from "Burn Notice."

The movie is inspired a true story that takes place in the 1920's-era of Pasadena, California. Angelina's son is abducted and is returned to her years later. She then realizes the boy that was returned was not her son. She is entered into an insane asylum when no one believes her. The boy then admits to the deception and it is learned her real son was murdered. She then goes after the corrupt LAPD for fraud. The film will be released in November 2008.

On Sunday I drove by the lot where the old cars were being stored. It was fun to see all the 1920's vehicles lined up in the gusts of wind. Made for some interesting shots. Can not wait to see the movie as I am sure we will recognize many of the places depicted.

Photo credit goes to socialitelife.com
Posted by simply susan at 11:35 AM

Wow, Susan that is a gorgeous shot. Did you take that pic? I love it!

How fun that is Susan!! I heard they were filming too. I did not know you were involved with Girl Scouts too. Hope to see you soon!!